Come see me this week at ACME. More blathering this week as the jokes get set. Some new ones this week, but no new Wallpaper Now! or Firefly. Just me and my snark. Watch me work it out as the week goes.

Also, if you check out ACME's Myspace page, you'll notice they used a picture for me they found on the deathless beast that is the Internet. The first person to email me (matt@ this Web site) with the URL they ganked the picture from wins a free copy of my CD. Good luck. Let's see what the power of Google can do when mixed with my miniscule fan base.
Posted by LP & Laundry at 4:10 PM No comments:

The Boise airport has free Wi-Fi, so here I am, waiting for my flight to board (in about an hour), and for once, not really feeling that put out. This is what I'd be doing in the condo anyway, except I wouldn't have the parade of humanity passing by.

The nice thing about airports is that you don't get too wide a range of people. Chances are, if you can afford to take a flight somewhere, rather than Greyhound, you've done something right in your life (or something wrong if you can afford first class). I'm no classist, but the 900-lb elephant in our collective room is that a lot of poor folks are that way at least to some extent as a result of the choices they have made in life. That tendency can make them difficult to take when you're thrown into the mix with them. Not that wealthy people don't present their own challenges, but you don't usually see them unless you happen to be serving them food or drinks, or happen to be within earshot of their cell phone conversation with one of their underlings.

There's a family in the waiting area. Mom, dad, brother and sister. Sister is probably about 2-3 and brother is probably about 4-5. The same distance between my girls. They were squirmy and whiny a few minutes ago, and dad was not coming off well with his frustrated responses. Fortunately, they realized that there aren't very many people at the gate yet, and that there is a long expanse of carpeting that they can race back and force across. The kids are squealing happily, running to a bank of seats, climbing up and then immediately getting off and running back to mom & dad.

Unfortunately, somebody just sat in their target area, so that's the end of that. Back to whining. Ah well, I have a laptop, headphones and Harvey Danger. Plus, I'm right next to an outlet, so no worries about the battery. Life is about as good as it can get in an airport -- at least without an expense account anyway.

Ah, the interloper has left the target seat. Thank God. The race is back on.
Posted by LP & Laundry at 4:01 PM No comments:

If last night's show is any indication, this is going to be a fantastic week. The Boise 'Bone has been on my "must get" list for, literally, years, and so far, it has not disappointed.

I spent some time walking around the newly-developed downtown area. As I mentioned yesterday, the area has been dubbed "BoDo." I found out from an extremely helpful lady at the souvenier shop, that the name is at least partially derived from the name of the developer contracted to revitalize the downtown. It seems there is some controversy. Here's my local-reference joke. It's a variation of a well-traveled structure, but I don't think I'll be able to resist.

So, there's been some controversy about the name "BoDo" for this area. What you may not know is that "BoDo" is actually a Spanish word brought over by the Basques, meaning "pointless one-way." 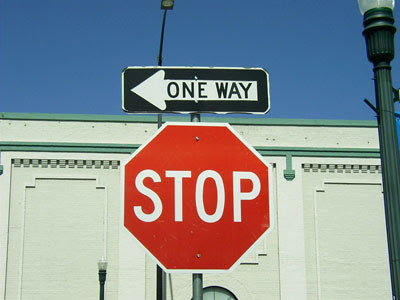 Boise folks will get it. The whole downtown area is riddled with one-way streets, which makes a wrong turn an opportunity for many leaps of directional faith to get back on track. Fortunately, I flew here. I'm on foot anyway. Hah!

I also noticed this sign on my walk back to the condo. 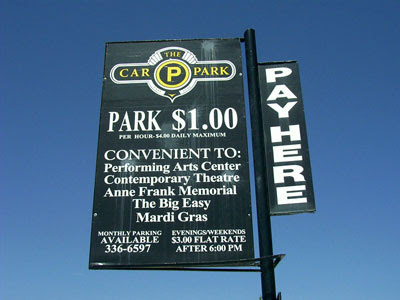 You're not fooling anyone, you know.
Posted by LP & Laundry at 3:12 PM No comments:

Wheels Down in Boise

I'm in the Boise condo, taking advantage of intermittent mystery Wi-Fi. I've been up since 4:20 this morning to catch my 6:30 flight to Boise. I make no promises of wit or wisdom here.

I'm just banging on the keys of my iBook, which by the way, continue their steady decline. Now the left Apple key is popping off from time to time, serving as a constant reminder of a) just how much I use it and b) just how staggeringly irrelevant the Apple key on the right is -- that one isn't near anything as far as I can tell.

The key popping off, however, has given me a glimpse into how the keys work. One would think it would just sort of snap back on, but there is a small metallo-plastic membrane array that defies logic. How it was attached in the first place is a mystery to me.

I flew Frontier here. Each seat has a television screen on the back which gets 24 channels of Direct TV for $5. Not worth it for morning television, but I may treat myself on the way back. Let's see how the CD sales go, shall we?

Boise seems like a lovely town, but my exposure has been limited to the airport and the downtown area. The downtown area is called "BODO." I don't think this name happened organically the way it does to neighborhoods in other cities, like "SoHo" or "Dinkytown" or "Hell's Kitchen." I get the impression that "BODO" is the brainchild of some high-priced marketing consultant brought in by the city a while back -- the naming equivalent of an artificial lake -- it may work quite nicely, but it still feels like cheating.

I'm more than willing to be proven wrong on this. If any Boise residents ("Boisians"? "Boiseites"?) happen to be reading this, please feel free to confirm or deny.