So we've got what I used to refer to as "ground bees." They're not bees per se. They are yellowjackets that happen to look and behave pretty much like bees. Except they live underground. Oh, and they're either a cloud of gentle pollinators who also happen to drag cicadas into their tunnels of death, or a deadly sting squad if enraged. And YOU CAN ANGER THEM WITHOUT TRYING!

The wasps get in and out through disconcertingly round tunnels. 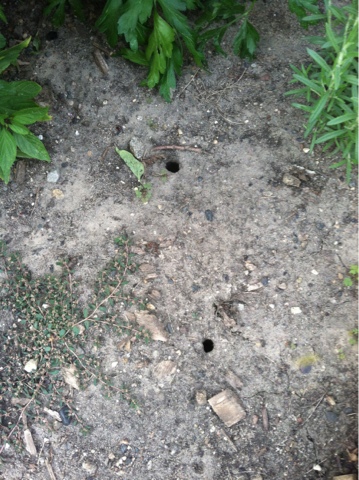 Weird, right? It looks like a hole made by a recently removed planter or something, but apparently, it's a doorway to HELL.

I took unilateral action that evening (wasps tend to return to the nest as the sun goes down). I'm ashamed to say that I resorted to chemical warfare... 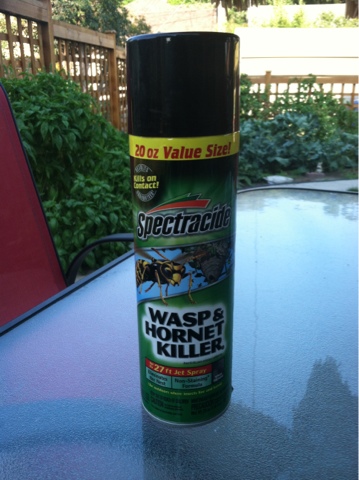 I gave each hole a good long shot until froth began to bubble out. That should do it, I thought. Probably not the best idea to spray concentrated poison into garden dirt, I know, but I figured that the benefits of a wasp-free environment in which to harvest our vegetables outweighed the risks. Besides, it wasn't going to rain for a while, so I wasn't too worried about runoff. Also, most of the vegetables in our garden were either ready to be picked or would be soon. It's not like the pesticide was going to make it through the soil and up into any of our food through the roots of the plants, right?


To be fair, my wife agrees with you. This was crossing a red line. Domestic relations were further strained by no measurable reduction in wasp activity the next day. What? Chemical warfare wasn't a simple solution to my woes? Unbelievable.

Further inspection revealed another entrance a few feet away, and what's more, one of the original paths reopened after only one day. Valiant worker wasps had made their way back through the poisoned earth. Probably wearing a muscle shirt and sweating like Bronson in The Great Escape.

And now I'm wondering if these three holes are all pointing to the same hive. Is there one megahive below our garden? If so, what the hell did they do with the dirt they displaced? Maybe they added it to the giant pile of dirt that rests in the corner of our driveway from an earlier project (by the way, if anyone needs dirt, just let me know. We have a lot to share).

Anyway. Modern chemical warfare was no longer an option (UN observers were now on the ground), but my wife found a kinder, gentler alternative. The folk/internet non-poison remedy is to pour peppermint soap down the holes. Apparently, mint is to wasps what garlic is to vampires, so they leave (note to self: plant mint next year).

Now, before you start thinking this is too gentle, we are also supposed to chase the soap with a kettle full of boiling water.

This is taking on a weirdly medieval feel. 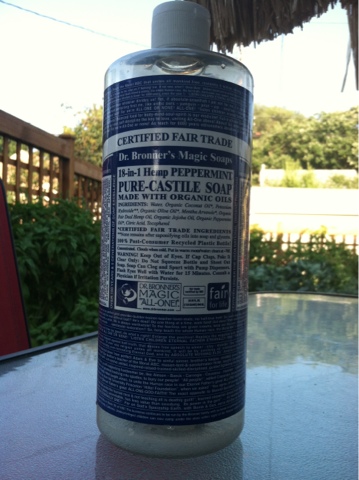 I should point out that this bottle is INSANE. Check out the text from the label. It's a baffling screed about cleanliness, God, Americanism and weird statements that I think are meant to appear to be quotes. My favorite:

"We can no longer live half-slave, half-free! We unite the Human race in All-One-God-Faith or perish by half-true hate! For we're All-One or None!" Abraham Lincoln

But I digress. For a few nights, I dutifully sprayed the soap and poured the water down the holes. 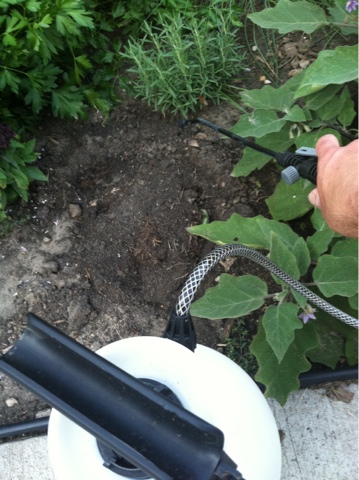 But each time, we still had wasps the next day. That's not to say their numbers hadn't diminished, but some of the holes were reappearing, though not the original ones. The Bronson wasp must have freaked out when the lights went out (Seriously, you owe it to yourself to watch The Great Escape).

Just the other day, I discovered, along with the realization that these pictures would play better in a blog if they were "landscape," a brand new (or at least previously unnoticed) hole! And right by our American flags! 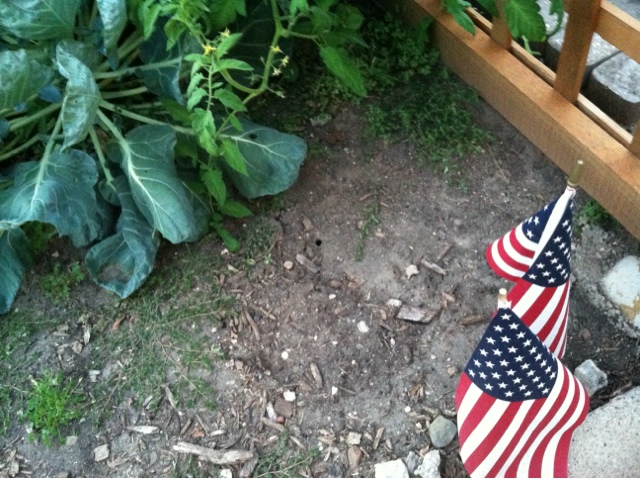 This will not stand! WASPS may run this country, but wasps do not!

Armed with my soap sprayer and kettle, I went to this new hole and started to spray. However, this time, I realized something. This whole time, I'd been spraying over the hole, just assuming the soap would do its job by running down into it. Maybe, just maybe, if I jam the nozzle into the hole and really ream that chamber out, spewing minty-then-hot death/unpleasantness down there, closer to where the actual nest is, I might get some better results. 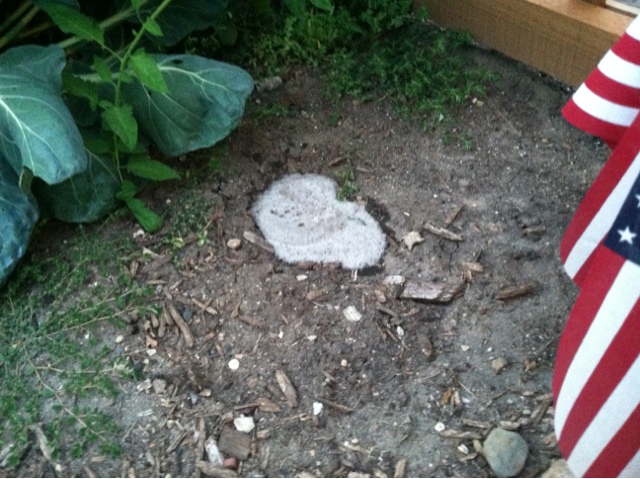 Will this finally take care of the problem? I'll never really know. I just looked at my neighbor's yard, and he's got about five holes of his own.